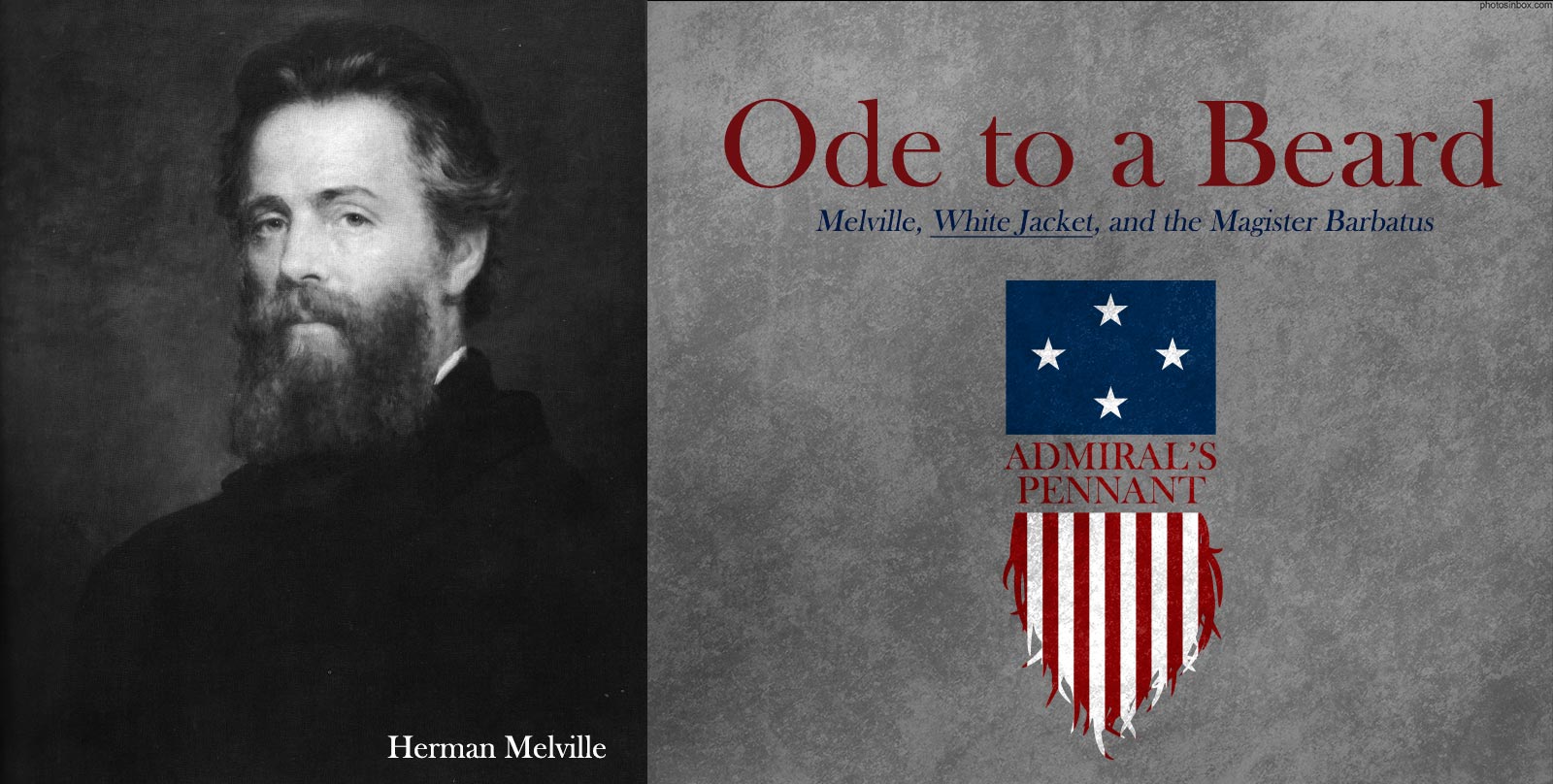 Good day, beards.  Today, we’re going to go on an emotional rollercoaster; for every man who has ever faced being told to shave or trim his beard, you will understand.  This is truly a story of love and loss, way better than Leonardo DiCaprio’s Titanic…

I will be delving into the love of beard, the agony of shaving, and the dedication a true Magister Barbatus has to his beard.  For this article, I will be referencing and pulling quotes from the book White Jacket by Herman Melville.  As many of you know, the name of our company came from this very book, not only did it come from this book, it came from the very chapter I will be discussing today.

If you’re in the mood for a good read, pick up a copy of this Herman Melville classic, or listen to it online.  If you don’t want to listen to the whole thing, at the very least, scroll to chapter 86:  The Great Massacre of the Beards.

Here you will find the most beautifully depressing ode to a beard that has ever been struck to paper.  The previous chapter covers the man-of-war barbers, but we shall save barbers for another tale.

Let me set the backdrop, the men of the Neversink! have been at sea quite some time, and are preparing to return home.  In preparation for this return, they had grown out their beards, in order to make a huge impression, obviously with the ladies, upon arriving with their impressive homeward-bounders.

Those of us who have served, or if you’ve heard tales from one who has served, you know there is always that one officer who has to put a damper on things.  Well, apparently the same was true in the 1800’s Navy.  The story begins here:

“As I now deviously hover and lingeringly skirmish about the frontiers of this melancholy recital, a feeling of sadness comes over me that I cannot withstand.  Such a heartless massacre of hair!  Such a Bartholomew’s Day and Sicilian Vespers of assassinated beards! Ah! Who would believe it!  With intuitive sympathy I feel my own brown beard while I write, and thank my kind stars, that each precious hair is forever beyond the reach of the ruthless barbers of a man-of-war”

Here he is, years later recalling the day he was ordered to shave his beard, the emotion and sadness he is STILL feeling from that fateful day.  He truly believes, as do we, that his beard is a living thing, a being unto itself, we can infer this from the word assassinated.  His beard had been assassinated!  What a cruel and unusual demand it is to order a beard shaved.  As Melville writes, he is far removed from the reaches of the ships barbers, and feels his own brown beard, petting it, calming it, letting it know that no man shall ever again attempt to extinguish its brilliance.  What love of beard Melville has!  A love we bearded men can all identify with.

The very next sentence is likening to the saying “those who fail to learn from history are doomed to repeat it”.  What he’s telling us is that, that day was so traumatic, that he must tell the story faithfully, in full detail.  As a man who has been to battle knows, it is better to talk about those events than to bottle them up inside, and I firmly believe Melville was so traumatized by the “massacre of the beards”, that this was his way to heal the scars left from that fateful day.

The officers had grown upset with the beards that were growing right under their noses, but they couldn’t say anything, since the Captain, Captain Claret, also wore a “small speck of beard upon his imperial cheek”.  Melville, however, does note that the Captain’s beard was within Navy Regulations.  Now I don’t know about you, but I think all services should go back to THAT regulation!

If you are a God fearing bearded master, pay close attention.  Melville was opposed to the Navy regulations in regards to his beautifully cultivated garden, and used the Bible as a defense.  He points out that the regulation is in direct opposition to theocratic law, which states, “Thou shalt not mar the corners of thy beard.” (Leviticus 19:27.)

They have no way of knowing what the captain had been thinking that night, but as the sun was setting, and every man was at his gun, the rays were coming through the portholes lighting up every whisker, and the deck looked like two long, even lines of beards.

The captain issued an order to shave.  Here is where we find the true love of beard and the dedication thereunto.

Shocked at the order to shave, not even 30 days from home, Melville calls the order barbaric, calls the barbers vile, and begins to wonder how his innocent chin will react to the chilled air of the Yankee coast, and the crew vows by heaven that they will not submit to such a despicable order.

The men, determined to disobey the order, did so valiantly, and called on all fellow beards to muster around the capstan, braid their beards together in a token of bearded brotherhood, cross hands in a human chain, and swear to enact a mutiny, as they would rather die than lose a single hair.

The next day the captain had been touring the evening quarters, and saw that not one beard, moreover, not one hair had been shaved.  He had the Boatswain repeat the previous day’s order, giving the men twenty-four hours to comply, lest they be written up.

The situation was now serious.  The men spoke of refusing to perform duties, until the order was revoked; Melville was opposed to shirking his duties, but wrote, that under such duress a man of war’s man will go to extremes.  The men did just that, they took over the boatswain’s stations, then removed the ladders, and cut off all communication between the decks.

The men had started a mutiny!  Over their beards!  What love and dedication!  The mutiny was short lived, as Mad Jack, a very respected man on the ship talked the men down, and as every man admired Mad Jack, they obeyed.  Mad Jack had just quelled a mutiny, a mutiny over whiskers, soap-suds, and razors.  Melville even wonders, how future historians would have written a long chapter in the history books about the “Rebellion of the Beards.”

The next morning, the barbers had their shops open, and razors at the ready.  They had even put out sheep shears to intimidate, and remind the men of the seriousness in which they must regard the order.

The massacre begins, as one crewmember is seen on a match tub, prepared for the first merciless stroke, of the barber’s razor.  In one fell swoop, his long beard removed, and the vile barber, grinning, tossed it out the porthole behind him.

Melville describes the massacre of the beard as follows:

“Sad Sight! at which anyone but a barber or a Tartar would have wept!  Beards three years old; goatees that would have graced a Chamois of the Alps; imperials that Count D’Orsay would have envied; and love-curls and man of war ringlets that would have measured, inch for inch, with the longest tresses of The Fair One with Golden Locks- all went by the board!  Captain Claret! how can you rest in your hammock! by this brown beard which now waves from my chin- the illustrious successor to that first, young, vigorous beard I yielded to your tyranny- by this manly beard, I swear, it was barbarous!”

The most sorrowful description of this event comes from Jack Chase.  Jack’s conversation with his barber is one that any man who loves his beard, who has ever been told to shave, either by boss or by spouse, can relate.

As Jack seats himself on the match tub, he begins:

“My friend, I trust your scissors are consecrated.  Let them not touch this beard if they have yet to be dipped in holy water; beards are sacred things barber.  Have you no feeling for beards, my friend?  Think of it!”

“Two years have gone by since my chin has been reaped.  I was in Coquimbo then, on the Spanish Main; and when the husband-man was sowing his Autumnal grain on the Vega, I started this blessed beard; and when the vine-dressers were trimming their vines in the vineyards, I trimmed it to the sound of a flute.  Ah! Barber, have you no heart?  This beard has been caressed by the snow-white hand of the lovely Tomasita of Tombez—the Castilian belle of all lower Peru.  Think of THAT, barber!  I have worn it as an officer on the quarterdeck of a Peruvian man-of-war.  I have sported it at brilliant fandangos in Lima.  I have been alow and aloft at sea.  Yea, barber! It has streamed like an Admiral’s pennant at the masthead of this same gallant frigate, the Neversink!  Oh barber, barber! It stabs me to the heart.”

With that, Captain Jack lowered his head in defeat, and his beard was shorn.

What a sad day it must have been, indeed.

This is the dedication each of us should show to our beards, and we can all learn a valuable lesson from this beautiful, sorrow filled tale.  That lesson is, NEVER, under any circumstance, should you ever shave your beard, unless you are in the uniformed service of the United States of America, and you are threatened with punishment, then and only then should you shave, but only after an attempted mutiny.

With such a testament to the beard, you can all now see why we named our company after the descriptive term written by Melville, spoken by Captain Jack, which remains in bearded solidarity with the men of the Neversink!.

Until next time, my brothers of beard, take care of yourselves and each other.